DALLAS, TX – The John and Judy Gay Public Library of McKinney on April 30, was the site of Darshana Day, an event hosted by the Hindu Swayamsevak Sangh (HSS).

More than 15 local and Dharmic organizations from Dallas including partners like McKinney Fire Department, McKinney Public library and many others hosted a launch event of the traveling poster exhibition titled “Darshana: A Glimpse into the Hindu Civilization.” 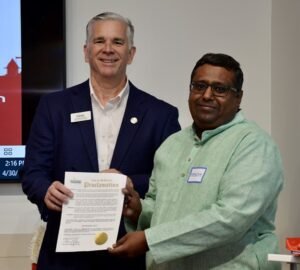 The exhibition had 24 posters prepared by volunteers of Hindu Swayamsevak Sangh on various topics, including arts, science, divinity, architecture, scriptures, spiritual traditions, festivals, dress, yoga, medicine and others. The event showcased several exhibits alongside the posters to enhance the contributions of Hindu culture.

City of McKinney also issued a Proclamation declaring April 30th as a Darshana Day for McKinney.

Volunteers answered questions from guests while they were going through the exhibition. Guests told the organizers that they were fascinated by the depth of their rich culture and civilization. Dignitaries showed interest in hosting the exhibition at their offices.

Plan a Nature Experience for Your Group